Everything about all the Ryanair destinations! From the price of parking to how to get to the airport! 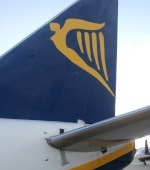 The airport lies south of the small town of Gosselies, north of Charleroi - and some 65 km south of Brussels center.

One can reach it
- by car
In my opinion, until a new access is built from the highway, the easier way is to go as usual to the old terminal and then go on around the eastern end of the runway to the new terminal.
- by coach from Brussels
Brussels : the coach stop is rue de France, on the side of the "Bruxelles Midi" (Brussel Zuid) railway Station (rather far down the right side when looking at the front of the station).
There is a coach departing from Brussels at about one hour interval from 04.30 to 20.30 - and from CRL the same between 08.30 and 23.30.
Fare is at the moment (July 2013), one way :
- on the net : from 5 to 14 euros (maximum)
- 17 euros by the driver or at the vending machines


The terminal is open 24/24.
Landside, it houses, from "Arrival" to "Departure":
- the arrival door
- a pastry shop
- customs
- lost and found
- a bank automat
- a Jetair travel center
- a newspaper- and bookseller, with a good choice of aviation magazines - at the back, left.
- the airport information desk
- an Irish pub
- near door 2 : a balance to check your baggage weight
- the check-in and drop desks
- the door to the security check
- the "Airport ticket desk"
Airside, past the security check :
- a skyshop with all the customary goods on sale in such shops : perfumes, alcohols, fashion, watches, sunglasses, and so on - also a few books and magazines
- where to eat and drink something
- a newspaper stand
- and, of course, the boarding gates. (To the left, the passport control giving access to the gates for the non-Schengen destinations).
- with a goodview of the apron, all along
The apron is two floors down, by stairs or lift;
- gates 1 to 11 are at groung level
When arriving, the baggage claim area and the exit are two floors up.

You can check the weight of your luggage here :

And if overweight, you'll be requested by the drop-desk to pay the fee here !

To the non-Schengen destinations :

From further on the right on the terminal, on can have a good view of aircraft coming in after landing :

... of aircraft going to the runway (behind, a light is landing on 07)

... and of the aircraft parking, in front of the terminal :

The terminal, as seen from a departing

And from an arriving

View of the river Sambre, on the right after T-O from 25 :